Biden’s Programs Would Fail for Many Reasons

President Biden is proposing to expand federal intervention in many areas that are the responsibility of state and local governments and the private sector. His $2.3 trillion jobs plan would subsidize broadband, automobiles, the electric grid, manufacturing, highways, transit, water systems, and much else. His $1.8 trillion families plan would subsidize pre‐​school, child care, colleges, paid leave, health care, food programs, and many other things. Every dollar spent on Biden’s plans would be extracted from elsewhere in the economy through higher taxes now or in the future.

Biden’s plans would impose large budget costs, but perhaps a larger problem is that the federal government is the worst institution to tackle the issues the president is focused on. Decades of experience with federal spending programs show that the government suffers from severe political, bureaucratic, and knowledge shortcomings that often make its actions inefficient, harmful, and sometimes disastrous. While federal programs help some people, they usually create costs and negative side effects that outweigh the benefits.

After being in Washington for decades, Biden should know this but he appears to be seized by the urge to exercise power. Younger members of his team are likely ignorant of past federal failures and entertain lofty visions of remaking society. But they should put their dreams aside and study how federal programs actually work. They should read Why Government Fails So Often by Peter Schuck of Yale Law School. He examined federal programs in detail and found that performance has been “dismal” and failure “endemic.” He concluded that,

many, perhaps most, governmental failures are structural. That is, they grow out of a deeply entrenched policy process, a political culture, a perverse official incentive system, individual and collective irrationality, inadequate information, rigidity and inertia, lack of credibility, mismanagement, market dynamics, the inherent limits of law, implementation problems, and a weak bureaucratic system.

I examined the structural reasons why federal programs usually do not add net value to society in a study on aid to the states and a study on government failure. The latter study identified five basic sources of federal failure and the types of failures they generated, as summarized in this table. 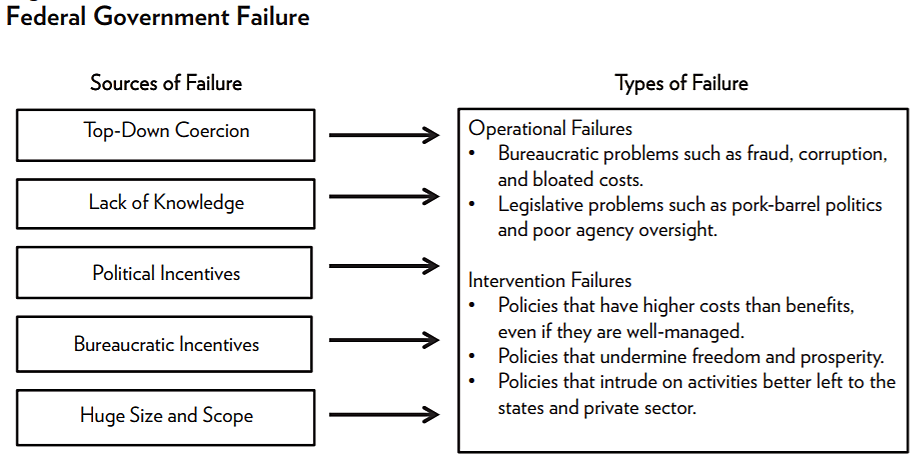 Here are brief descriptions of the five sources of federal failure.

First, federal policies rely on top‐​down coercion, which creates winners and losers, and which displace mutually beneficial market relations. A related problem is that by excluding markets and the price mechanism, federal actions rely on guesswork, which results in resource misallocations and failures. Then in turn, government failures don’t get weeded out as they would in markets because they are funded by coerced taxes not voluntary transactions.

Second, the federal government lacks knowledge about our complex society. That ignorance is behind many unintended and harmful side effects of federal policies. While markets gather knowledge from the bottom up and are rooted in individual choices, the government’s blunt and coercive actions destroy that knowledge and squelch diverse preferences in society.

Third, legislators often act counter to the broad public interest. While America is a democracy, logrolling in Congress allows frequent enactment of programs that do not have majority support in the legislature or in the nation. Once programs become law, they get entrenched and difficult to reform or repeal.

Fourth, civil servants act within a bureaucratic system that rewards inertia, not the creation of value for the public. The lack of firing and performance pay, and the excess of red tape and bureaucratic layering, are some of the problems in the federal bureaucracy. Reforms over the years have tried to bring business efficiencies to the bureaucracy, but there are fundamental reasons why federal agencies will always be inefficient.

Fifth, as the federal government grows larger, its performance deteriorates. Legislators are overloaded by the demands of fundraising, speeches, and constituent service, let alone trying to understand the armada of 2,300 federal programs they have created. Even before the pandemic, the federal budget was 100 times larger than the average state budget, which is far too large for legislators to adequately oversee or control. Furthermore, each new spending program likely produces less value than the last, while the tax costs of funding each new program increases rapidly at the margin.

Biden’s programs would face these and other problems. New programs and related regulations would generate negative and unforeseen side effects, and they would destroy beneficial diversity in state policies and society. Program execution would be poor, and failed programs would not be repealed or reformed. Policymakers would be even more overloaded and have less time for proper oversight. Government performance would decline further.

Chris Edwards is the director of tax policy studies at Cato and editor of Down​siz​ing​Gov​ernment​.org. He is a top expert on federal and state tax and budget issues. Before joining Cato, Edwards was a senior economist on the congressional Joint Economic Committee, a manager with PricewaterhouseCoopers, and an economist with the Tax Foundation.

The Most Critical Metal You’ve Never Heard of

Review of “There & Back Again”, by D.M. Cummings

The Savings Of Peruvians Are Reduced Due To The Pandemic

Please excuse us as this website is being upgraded live.
Learn more
This is default text for notification bar
Learn more