The nine states without an individual income tax are Alaska, Florida, Nevada, New Hampshire, South Dakota, Tennessee, Texas, Washington, and Wyoming. The states are in every part of the country and have different industry mixes, histories, and political cultures. What they have in common is providing needed state‐​local services to their residents without complex, anti‐​freedom, and anti‐​growth individual income taxes.

Most of the nine run leaner and more efficient governments than most other states. They only partly make up for the income tax revenue gap with other revenues. In terms of overall tax burdens, eight of the nine states are toward the bottom of the 50 states and Washington is in the middle.

However, Alaska and Wyoming are different because revenues related to their energy industries have induced them to fund bigger governments. They spend more and have larger bureaucracies than most other states, and thus do not provide fiscal models that other states could or should follow. That leaves seven states without individual income taxes that others may seek to emulate.

The chart shows state‐​local taxes in 2020 as a percentage of personal income for the seven states, as well as Alaska and Wyoming, New York, and the other 40 states. This tax‐​to‐​income metric accounts for different state populations and income levels. New York may need to pay school teachers more than does a lower‐​cost state such as Florida, but the metric roughly adjusts for this. Data is from a TPC table based on Census figures. 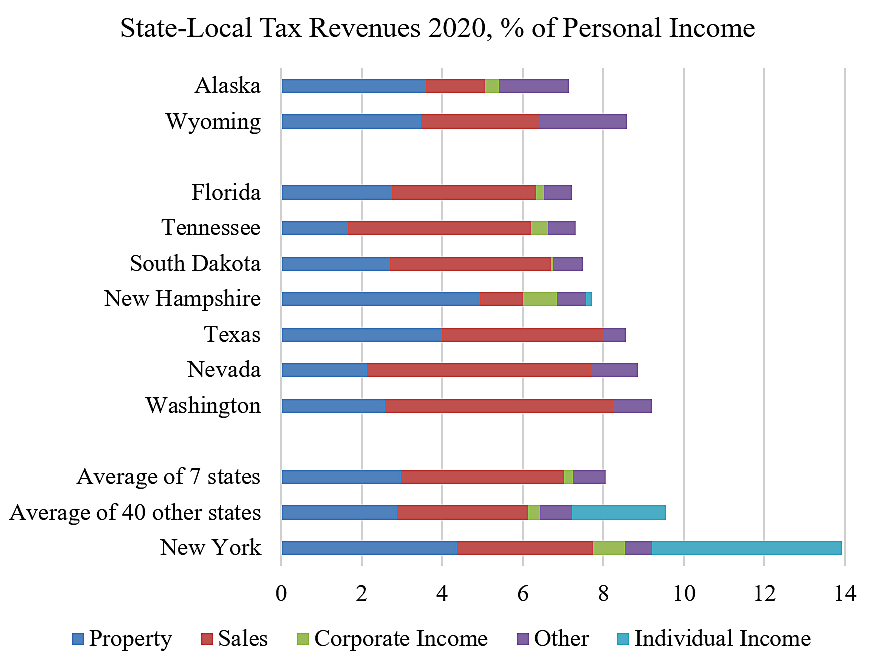 I highlighted New York because its high tax burden is remarkable. New York’s bureaucracy is 34 percent larger than Florida’s, even though Florida has more residents. New Yorkers pay the most in taxes and enjoy the least freedom of any state. Why can’t New York provide services as efficiently as Florida, Texas, or Washington?

New York and the other 40 states should learn from the seven. There is a movement toward repealing individual income taxes in some Republican states. Mississippi Governor Tate Reeves approved major income tax cuts this year and wants full elimination: “If we can eliminate the income tax, we will achieve an historic victory for this state. We can become a place that money flows more freely, and all Mississippians will benefit.”

Repealing state individual income taxes is a good goal. The seven states are diverse, but they’ve all made it work. Residents get the state‐​local services they need, but at lower cost. Within the seven states, policymakers should cut business taxes, as Governor Chris Sununu of New Hampshire has done.

The combination of property taxes, sales taxes, and fees for some services should be enough to run state and local governments. If policymakers deliver needed services in a lean and efficient manner, they can free their residents and businesses of complex and damaging state income taxes.