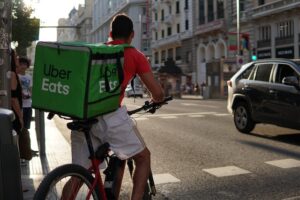 By Walter Olson, Cato Institute
“Biden wants to let gig workers be employees,” reads the headline on a Washington Post story. The lead paragraph says the Biden Department of Labor intends to “make it easier” for independent contractors to be considered employees, “granting them access to benefits and federal labor protections.”

“Let” is truly a bizarre wording here, reinforced by words like “easier” and “granting.” The proposed Labor Department regulation doesn’t grant permission, it imposes a requirement. It would force employee status on many workers who actively wish to remain independent contractors. Unless you grasp that, you’re not going to grasp the mounting anger among many freelancers, independent truckers, and others whose livelihood is threatened by DOL’s proposal to sharply restrict independent contracting in the workplace.

We’ve seen this before with California’s disastrous AB 5, which was repeatedly revised to exclude lines of business in which it was causing havoc. While media coverage of the issue tends to focus on platform‐​based gig‐​workers, workers hurt by AB 5 included many tutors, performers in music and theater, plumbers, nurse practitioners, writers, photographers, contract software developers, and many others, notably owner‐​operators and other independent truckers.

And we’ve also seen this at the federal level in its previous go‐​round as the Obama administration’s 2015 initiative along the same lines (although this version would go even further). As we noted then, the intended restrictions on franchising and subcontracting would endanger the thriving white‐​van culture of small skilled contractors by which so many tradespeople now find upward mobility, trading it instead for clock‐​punching at some company division. And it would force tech, creative, and startup firms that currently outsource functions like cafeteria, janitorial, and landscape maintenance to take on much wider direct employment responsibilities they may not be particularly well equipped to handle.

Most of the jobs the new regulation would endanger aren’t “gig economy” jobs at all and have nothing to do with platform apps. Nonetheless, it’s worth emphasizing that, as Ike Brannon and others have shown, the platform/“gig” sector of the economy makes possible flexibility on time and hours that is highly valued by many current workers and would be threatened under an arrangement in which employers would have strong reason to terminate contractors who put in time sporadically or for only a few hours a week.

The public can file comments here through November 28.

Walter Olson is a senior fellow at the Cato Institute’s Robert A. Levy Center for Constitutional Studies and is known for his writing on law, public policy, and regulation.