Last month, Senator Elizabeth Warren proposed what could potentially be the first federal anti‐​price gouging law. A survey of top economists now overwhelmingly agrees with our assessment that this legislation would be a very bad idea.

Warren’s Price Gouging Prevention Act of 2022 would generally outlaw firms with over $1 billion in revenues from selling or offering to sell “a good or service at an unconscionably excessive price during an exceptional market shock.” Shocks are defined to include natural disasters, power outages, strikes, civil disorder, war, or public health emergencies.

As we previously explained, firms’ defenses against such charges would rely on them proving that their costs had increased. The legislation seems to regard it as illegitimate for sharp demand spikes to justify higher prices. Instead, Warren’s bill would create a bureaucratic nightmare, as firms would be compelled to disclose detailed financial information such as gross margins and price and volume changes to the SEC during quarterly periods throughout emergencies.

Economists have long objected to anti‐​price gouging laws that use the threat of fines to effectively cap prices from increasing significantly. These laws tend to misallocate resources and prolong shortages by deterring investments in firms expanding capacity or entrepreneurs getting supplies to where they are most needed during crises. The most recent IGM poll conducted by the University of Chicago Booth School of Business, though, shows economists think Warren’s specific proposal would be both costly and counterproductive.

In response to the first poll prompt, “It would serve the US economy well to make it unlawful for companies with revenues over $1 billion to offer goods or services for sale at an ‘unconscionably excessive price’ during an exceptional market shock,” 65 percent of economists polled disagreed or strongly disagreed, while only 5 percent agreed, with no one in strong agreement. The margin grew larger still when weighted by each respondent’s confidence, with 84 percent disagreeing and only 3 percent in agreement, as the results below show. 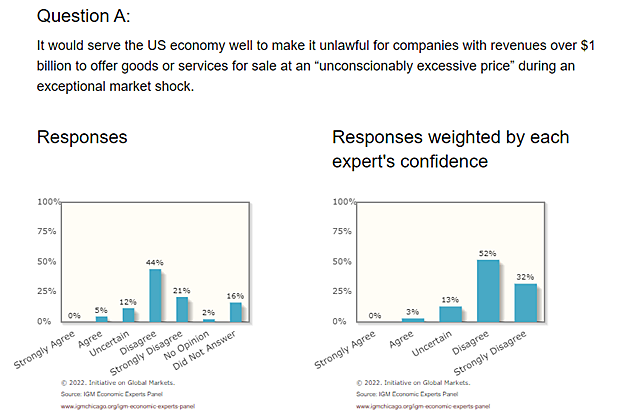 The second prompt “It would serve the US economy well if companies making quarterly SEC filings were obliged to include a tabulation of all price changes of goods or services sold, together with the associated cost changes,” also got the thumbs down. Only 9 percent of respondents agreed, while 63 percent disagreed. Weighing the confidence of each respondent generated 84 percent disagreement and only 5 percent agreement. 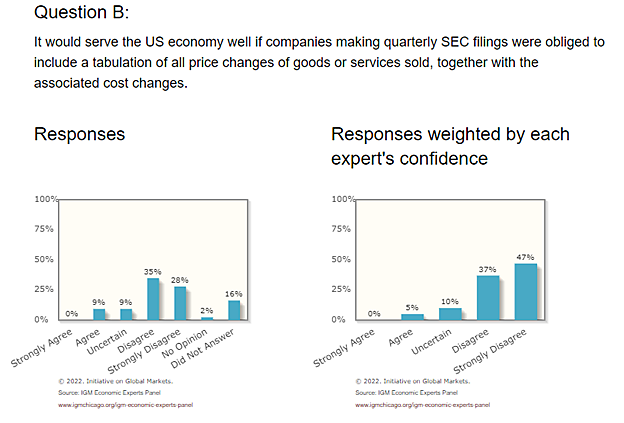 As Professor Eric Maskin stated in response to the first prompt, “At a time of shortage, high prices can serve to stimulate an increase in [the quantity of] supply.” Progressives in Congress would do well to heed this feedback. The vague wording, blunt enforcement mechanisms, and misunderstanding of basic supply and demand within the bill could hinder the adaptability of U.S. markets to future crises and prolong shortages during emergencies. As Professor David Autor responded, Warren’s proposal “sounds like a bureaucratic nightmare. We need healthy competition policy, not a government that scrutinizes every price change!”

For more on price gouging see here, here, and here. It is also discussed extensively in Ryan Bourne’s book, Economics In One Virus.

Ryan Bourne occupies the R. Evan Scharf Chair for the Public Understanding of Economics at Cato.