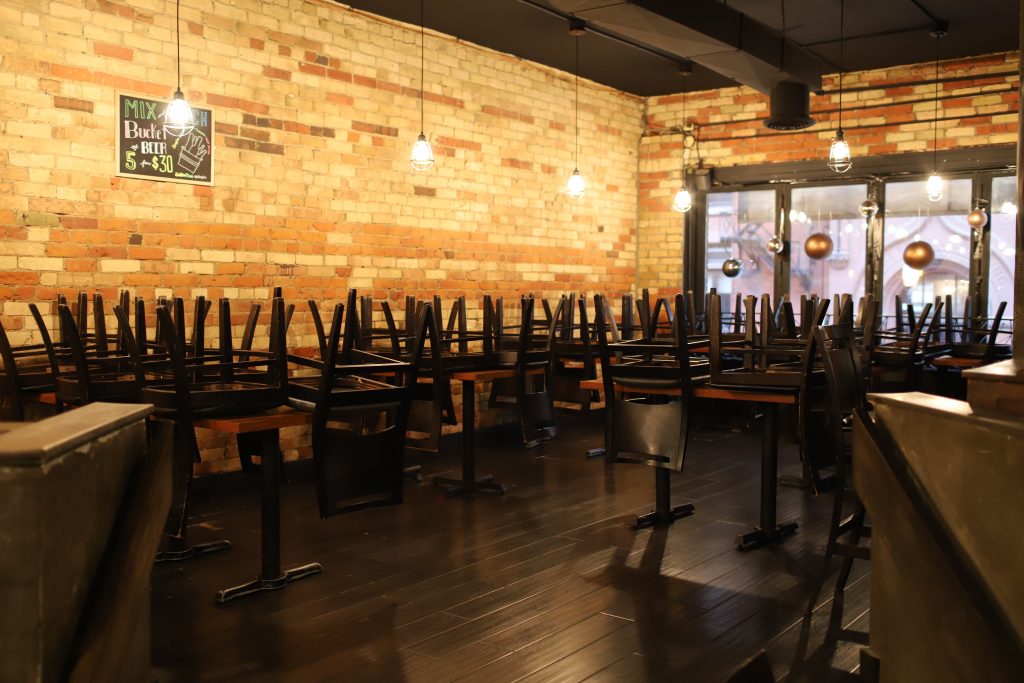 “The Flawed COVID-19 Model That Locked Down Canada”

By Peter St. Onge and Gaël Campan, courtesy of IEDM

Before mid-March, most Canadians saw COVID-19 as an overseas problem. The emphasis was on returning Canadians stuck in China, and there had been a single COVID-19 death in Canada, a BC man in his 80s with underlying health issues.

Then, suddenly, the world changed. Within two weeks, practically the entire Canadian economy was locked down. Gatherings were banned, schools and daycares closed, and nearly every business deemed “non-essential” shut down in a bid to slow the virus. Historic job losses followed, 500,000 in the first week alone. By April 13, nearly 6 million Canadians had applied for emergency benefits.(1)

What happened? On March 16, Professor Neil Ferguson of Imperial College London released an epidemiological model that took the world by storm.(2) The report warned that tens of millions would die in a pandemic that was compared to the Spanish flu, the deadliest epidemic in modern times.

The only option, warned the report, would be radical physical distancing of the entire population, potentially for 18 months, until a vaccine was available. The paper advised that less restrictive methods such as isolation of suspected cases and physical distancing of the elderly and at-risk would merely reduce deaths by half. Instead, what was needed was total isolation. Two days later, the US-Canada border closed to non-essential travel, and one week after that, Prime Minister Trudeau announced an $82‑billion aid bill to address the massive job losses expected from the lockdowns.

Now, two months later, experts have uncovered serious flaws in the original Imperial College paper. Furthermore, evidence has emerged that Professor Ferguson himself has a long history of overpredicting deaths by a wide margin—a concern confirmed by data from countries that never locked down in the present crisis. It follows that Canada and other countries may have vastly overreacted to a single bad projection.​

The Predictions Behind the Lockdown

In his March 16 paper, Professor Ferguson predicted that COVID-19 would kill 510,000 in the UK and 2.2 million in the US in 2020. Ten days later, his team gave revised estimates for many countries, including Canada, and they were grim. Ferguson projected that, unmitigated, COVID-19 would kill 326,000 in Canada this year (see Table 1). With a “75% reduction in interpersonal contact rates,” however, he predicted deaths would fall to under 46,000 in Canada. Worldwide, he predicted that in the “unmitigated” absence of interventions, COVID-19 could infect 7 billion, resulting in 40 million deaths.(3)

The World Health Organization (WHO), which had just months earlier stated that mass quarantines are not effective for infectious diseases, quickly changed its tune, promoting the package of coercive measures China had enacted, including mandatory quarantine, contact tracing by authorities, and ultimately, lockdowns.(4)

Professor Ferguson’s paper had an enormous impact on lockdown debates. He himself was quickly dubbed “Professor Lockdown” in the media.(5) Johan Giesecke, former chief scientist for the European Center for Disease Control and Prevention, has called his model “the most influential scientific paper” in memory, and also “one of the most wrong.”(6)

Why was Professor Ferguson so influential? Mark Landler and Stephen Castle wrote in The New York Times, “It wasn’t so much the numbers themselves, frightening though they were, as who reported them: Imperial College London.” With the professor’s ties to the WHO, the authors noted, Imperial was “treated as a sort of gold standard, its mathematical models feeding directly into government policies.” The title of the Times article said that Ferguson’s report had “jarred the U.S. and the U.K. to action,” as Britain shelved its original strategy of allowing herd immunity to spread in favour of a strict lockdown.(7)

The panic quickly spread to Canada. The medical director of critical care at a Toronto hospital warned that Ontario’s health system could face “total collapse,” writing, “It’s World War Three. This could be an unmitigated disaster. This is the time to overreact.”(8)

Today, the world looks very different. Far from “World War Three,” hospitals are actually turning off the lights in some formerly busy corridors. In Ontario, “almost 78 per cent of the province’s expanded ventilator capacity remained free” in early April as “patient volume was well under the ‘best case’ scenario depicted in Ontario-government epidemic modeling.” At the end of April, Ontario’s chief medical officer announced dozens of deaths from cardiac patients avoiding hospitals for fear of COVID-19.(9)

Moreover, the pandemic has had far worse effects in Quebec, especially Montreal, despite one of the most aggressive lockdowns in Canada. Given over 82% of Canadian COVID-19 deaths have been in long-term care facilities, it is possible that senior centre policies may have been far more important than lockdowns.(10)

A cleaner comparison, then, comes from countries that never shut down at all, including, famously, Sweden, and also Japan, Korea, and Taiwan. These countries were essentially Professor Ferguson’s “unmitigated” scenario; restaurants and bars remained open, governments merely requested people social distance, a recommendation that was widely ignored even in Japan, where neighbourhood bars and diners remain packed into the night.(13)

Here in Canada, so far COVID-19 is tracking slightly above a bad seasonal flu, with 5,169 COVID-19 deaths as of May 12 compared to 3,500 the Ontario Ministry of Health estimates across Canada in a typical flu season.(15) The situation is not resolved, to be sure, and if the typical bell-curve pattern of influenza is a guide, we could see deaths double or more. But we would never dream of throwing 6 million Canadians onto public assistance to head off even a very bad flu season.

What went wrong? Shockingly, the code that generated Professor Ferguson’s doomsday prediction was neither public nor peer reviewed. He himself admitted the computer code has thousands of lines of “undocumented” code, which makes it impossible to verify. A senior software engineer from Google found the code has amateurish errors, including giving different answers depending on the number of CPUs in the specific computer running the model. This makes the results unverifiable, and therefore meaningless.(16) 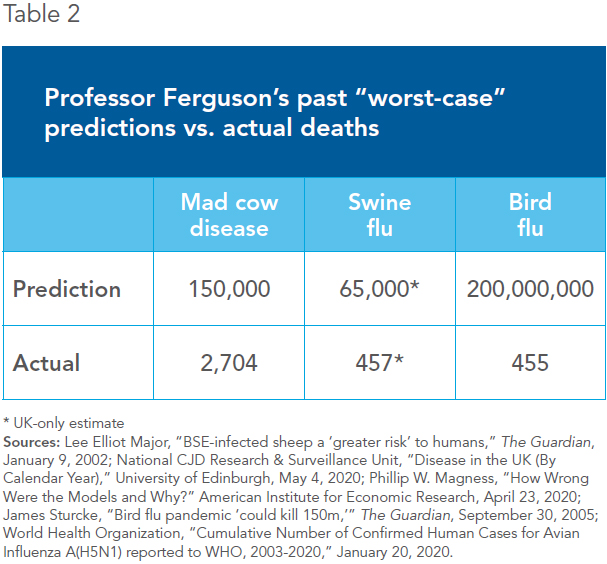 Picking Up the Pieces

First of all, the challenge is how to get out of this economic catastrophe. This involves weighing not only the health threat, but the well-established reality that mass unemployment and poverty kill, from suicide to substance abuse to malnutrition among the vulnerable.(18)

This trade-off requires involving economic experts as well as epidemiologists, lest narrow groupthink dominate our response. Countries like Germany and the Netherlands have already implemented measured re-openings,(19) and now certain Canadian provinces are starting to as well. If other Canadian policymakers don’t move quickly, we run the very real risk of making the cure far worse than even the disease.

Second, COVID-19 has shown us how little margin of error we have in health care capacity. After years of deep concern about overburdened hospitals and waiting lists,(20) it is time to dramatically expand Canada’s health capacity so that we are not perpetually sitting on a knife’s edge.

Liberalization would include private-sector options that relieve the burden from the public sector even in normal times, but especially in a crisis. And it would include regulatory modernizations for both health care providers and manufacturers, including easing the long path to the development and introduction of new medicines and, indeed, new vaccines.

Third, we need proper scrutiny of the scientific models policy-makers rely on. Academics do not even regularly audit code in models, which would be unacceptably amateurish in, for example, car insurance. This issue is already intensely debated in the US, as skeptics accuse the Environmental Protection Agency of using “secret science” relying on hidden data or opaque modeling assumptions to enact green activists’ wish-lists.(21)

Anonymized data and computer code should be open to public scrutiny as the minimum requirement for any study that is used to justify public policy, from lockdowns to carbon taxes. Furthermore, these studies must be based on verified facts and use code that actually does what it says it does, and the ensuing decision-making process must be transparent and open to the public.

One former Indian bureaucrat put it well: “Emergency situations like this pandemic should require a far higher—and not lower—level of scrutiny” since policy choices have such tremendous impact. “This suggests a need for democracies to strengthen their critical thinking capacity by creating an independent ‘Black Hat’ institution whose purpose would be to question any technical foundations of government decisions.”(22)

As for the present crisis, any continuing or future lockdowns and restrictions must be based on transparent and verifiable science. We emphatically have a right to expect that any policy that threatens millions of Canadians’ livelihoods and civil liberties is based on the very highest level of scientific rigour.