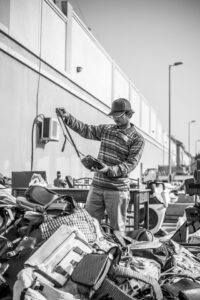 Though leftists often claim that millionaires and billionaires are not paying their “fair share” of taxes, when government casts a wide net to gather every last crumb of unreported income, it is mostly compliant, working-class Americans who get caught. Actions that aim to encourage “voluntary” compliance with the Byzantine tax code usually raise costs to taxpayers but yield little additional revenue.

A case in point is the elusive tax gap due to underreported income, which now amounts to around $600 billion a year, says Natasha Sarin, a deputy assistant treasury secretary for economic policy. A percentage of that unreported income is from wage earners and sellers who participate in the online economy.

Nearly a quarter (24 percent) of American adults reported earning money through digital platforms in 2016, a Pew Research Center survey found. Some 8 percent earned money from an online “gig” platform, and 18 percent earned money selling something online. The Internal Revenue Service will have a deeper window into the finances of millions of these gig workers, eBay side-hustlers, and unbanked Uber drivers beginning in 2022.

Currently, online payment platforms, such as PayPal and credit cards, must issue an information return called a 1099-K when payments for goods for services to an individual through that platform total more $20,000 and more than 200 transactions in a year.

Tucked into the American Rescue Plan Act of 2021, signed into law by Joe Biden on March 11, section 9674 reduces the threshold for issuing 1099-Ks to $600, with no minimum number of transactions required.

Cindy Monk of the accounting firm GunnChamberlain, P.L. states that activities “highly likely to cross the new threshold in 2022 and beyond,” include homes on Airbnb or VRBO; selling crafts on Etsy, “[u]sing Stripe to collect payments for baked goods at summer farmers markets or festivals,” [d]riving part-time for Uber, Lyft, DoorDash, or Postmates,” or “[r]eselling garage sale treasures on eBay.”

The ostensible purpose of these changes is to catch and tax unreported income—though much of the underreporting of online income involves small amounts. Only 13 percent of workers with more than $400 of such income failed to report the income for self-employment and income tax purposes for tax years 2012 to 2016, according to the U.S. Treasury Department’s Inspector General for Tax Administration.

In fact, for most of the people involved, gig work and online sales are sources of supplemental or occasional income, rather than the main source of earnings. “Available tax data from tax year 2016 suggest that only around 30 percent of platform workers who were known to IRS had gross platform-related earnings higher than $5,000,” states a 2020 Government Accountability Office report.

Congress’ Joint Committee on Taxation estimated the change in 1099-K reporting requirements will raise a total of $8.4 billion over the next decade—less than a rounding error compared to the $1.9 trillion cost of the ARPA.

The new minimum applies to payments for goods and services, but not other transactions, such as earnings on Bitcoin, states Liz Farmer, a senior contributor to Forbes. There is, however, a “fix” for this crypto-currency “loophole.”

The tax gap would be further addressed by a provision of Biden’s American Families Plan. The proposal would raise revenue for all the new federal spending in the reconciliation bill congressional Democrats are debating. It would require comprehensive reporting of transactions (deposits or payments) for any account owned by Americans—bank, retirement, loan, credit card—that total $600 a year.

This is a further assault on the financial privacy of Americans, James Bovard, an adjunct fellow at the American Institute for Economic Research told American Greatness.

“Financial privacy has been taking a beating from the feds going back to the 1970s,” said Bovard. “After 9/11, the attacks on privacy accelerated and Biden is practically seeking to put a wooden stake into the heart of remaining privacy.”

Surely, some people will seek to avoid this intrusive data collection by switching from financial accounts in institutions regulated by the Federal Deposit Insurance Corporation (FDIC), to crypto-currencies such as Bitcoin, or cash. Bovard has written that “Biden’s new reporting requirement could be the Bitcoin Relief Act of 2021.”

“Biden’s proposal will spur distrust of the banks, thereby spurring more people to put their cash into Bitcoin rather than FDIC institutions,” said Bovard. “Folks are beginning to fear that the U.S. government could go as berserk as the Indian government and its perfidious seizure of cash a few years ago.”

Joe Barnett was managing editor of Budget & Tax News, a publication of The Heartland Institute. He now serves as a volunteer policy advisor.