Reports this week indicate that President Biden and congressional Democrats could extend the enhanced Child Tax Credit (CTC) for only one year in their massive Build Back Better Act (BBB), rather than the four years originally proposed by President Biden. This will appear to reduce the cost of CTC extension on paper, potentially by hundreds of billions of dollars, but will also deceive America’s taxpayers about the long-term budget impact of a significantly expanded CTC.

As we previously wrote, some progressive Democrats looking to stuff the maximum number of programs and priorities in the BBB are hoping to have those programs expire after a few years. This both reduces the on-paper cost of BBB, as scored by the nonpartisan Congressional Budget Office (CBO), and amounts to a political bet that BBB programs will be so popular that a future Congress — whether controlled by Democrats or Republicans — will simply have to extend these programs for additional years or make them permanent.

It’s a political bet, but it’s one that masks the true cost of the BBB agenda to millions of Americans who will only see the topline spending levels of BBB in headlines and news stories. It also runs counter to some Democrats’ calls to do “fewer things well” rather than stuff an array of half-measures and budgetary gimmicks into BBB.

CTC expansion is one of the most expensive parts of the BBB agenda. The American Rescue Plan Act (ARPA) raised the CTC dollar amount from $2,000 per child to $3,000 per child for most families (and from $2,000 per child to $3,600 per child for children ages 0-6). ARPA also made the CTC fully refundable, meaning low-income families could access the full benefit even if CTC amounts exceed their tax liability. And ARPA changed the administration of the CTC from an annual, lump-sum benefit at tax filing to monthly payments, delivering $250 to $300 checks to tens of millions of families every month starting in July 2021.

The Tax Foundation previously estimated that making this expansion permanent, rather than extending it for only one year or four years, would cost more than $1.5 trillion over the next 10 years alone. The Joint Committee on Taxation estimated that four-year expansion (with permanent refundability regardless of the CTC amount) would cost $556 billion. One-year extension, on the other hand, may only cost somewhere in the neighborhood of $100 billion. 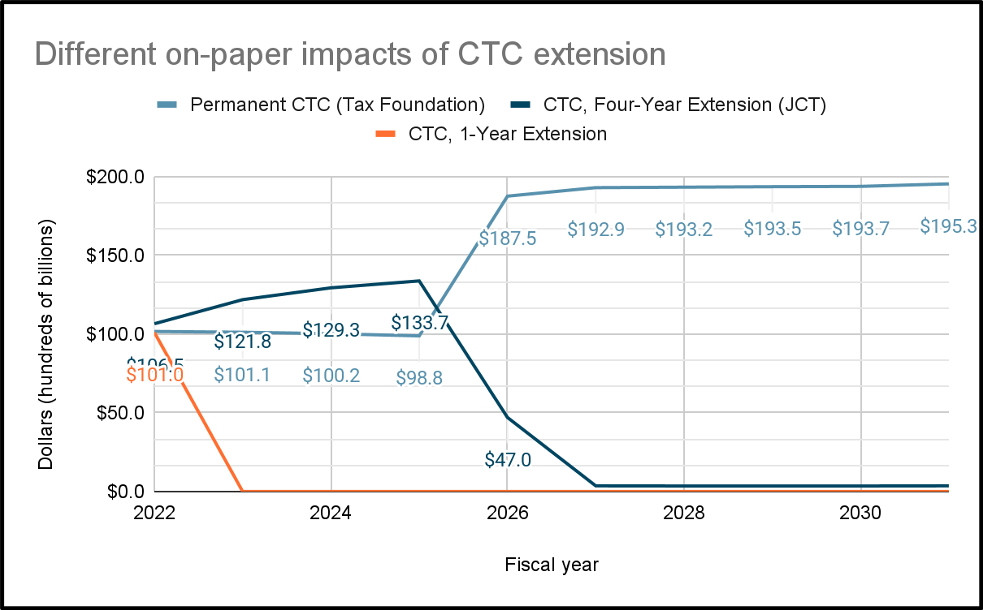 It would be one thing if lawmakers wanted to extend CTC for a short period of time in order to study and assess what is working and what is not working about the expanded CTC (such as the monthly payments, refundability, and other new design features). That is not the case. President Biden and several Democratic members of Congress have made abundantly clear that they intend for the CTC expansion to be permanent. Accordingly, they should have a plan to make the CTC expansion permanent and to pay for that expansion.

Sen. Mitt Romney (R-UT) has offered a framework, the Family Security Act, that the Senator says will pay for CTC expansion with spending reductions to complicated programs prone to improper payments (like the Earned Income Tax Credit and Temporary Assistance for Needy Families) and with the elimination of the regressive state and local tax (SALT) deduction. This is a far more thoughtful approach to extending CTC than the current reconciliation approach, which would extend CTC for an artificially short period of time and partially pay for the expansion with tax increases that fall on low-income and middle-class families.

Extending the CTC for only one year would be a fiscal and policy disaster, making CTC expansion a part of the annual tax extenders process that NTU and NTU Foundation have criticized as inefficient and gimmicky. It would also significantly expand the size of annual extenders packages. The $100 billion to $120 billion annual CTC expansion cost from 2023-2025 could be more than the entire extenders package from December 2020. That legislation, which made six provisions permanent, extended 11 provisions through 2025, and extended 19 provisions through either 2021 or 2023, totaled a $104 billion budget impact over 10 years.

A one-year extension of the expanded CTC would also create substantial uncertainty for taxpayers and further complicate the tax code. Essentially, taxpayers would be put in the untenable position of waiting to see if Congress decides to extend the ARPA version of the CTC every year. If lawmakers declined to extend it, depending on the year, the credit could revert back to the Tax Cuts and Jobs Act (TCJA) version of the CTC with a maximum credit size of $2,000, no refundability, no monthly payments, and lowering the maximum age from 17 to 16 years old. If lawmakers declined to extend the credit after 2025, the credit would revert back to the pre-TCJA version with a maximum credit size of $1,000 and other changes. Putting parents and families in a situation where every year can bring about substantial changes to the size of the credit, their eligibility, and the timing of payments would make the CTC more confusing for taxpayers and undermine some of the positive impacts of the credit.

In short, extending the CTC for one year is a budget game that obscures the true cost of CTC expansion to the nation’s taxpayers. Lawmakers should pursue a more honest approach if they wish to prioritize CTC expansion in a reconciliation bill, and should pursue offsets similar to those outlined by Sen. Romney.