In defense of the new corporate ‘book’ minimum tax included in the House version of the Build Back Better Act, Sen. Elizabeth Warren (D-MA) has published a new analysis on the tax proposal from her staff. The analysis is provocatively titled, “Tax Dodgers: How Billionaire Corporations Avoid Paying Taxes and How to Fix It.” Unfortunately, the paper, which uses data compiled by the Institute on Taxation and Economic Policy (ITEP), relies on deeply flawed assumptions about how corporations calculate and pay taxes. The analysis often misses the forest for the trees, possibly in an effort to make political punching bags out of certain American companies. Policymakers should largely disregard the analysis as they consider the potential impacts of a corporate ‘book’ minimum tax.

According to Senator Warren, President Biden, and some other stakeholders, a corporate minimum tax is a simple, cut-and-dry matter of “tax fairness.” Their argument goes something like this: corporations and their armies of lobbyists have paid for a tax code rigged in their favor, and they play accounting games to artificially reduce their tax obligations while reporting significant profits to shareholders.

In contrast, NTU and NTU Foundation have long noted that there are important reasons why a company’s financial statement (or ‘book’) income and their taxable income may differ. Some of those differences are temporary and due to the timing of income and expenses (e.g., how accounting standards and the tax code treat cost recovery periods for business investments). Some differences are permanent, such as differences due to popular and bipartisan tax credits available to businesses like the research tax credit and the low-income housing tax credit.

Senator Warren’s analysis blurs these differences and makes a number of flawed assumptions in the process.

First, the analysis bizarrely focuses on executive compensation at certain companies. Perhaps the intent is to suggest that companies that pay their executives millions of dollars should always pay a minimum statutory tax rate on their book income — regardless of the temporary and permanent differences between financial statement income and tax income noted above. If this is Senator Warren’s intent, NTU simply disagrees with this view. But the focus on executive compensation is also somewhat of a misfire from a policy perspective, given publicly-traded companies are already limited in how they can deduct certain types of compensation above $1 million for highly-paid executives. For more, see this piece here.

Second, as the Senator acknowledges, her analysis does not include “the use of certain tax credits and loss carryforwards that cannot be calculated” due to a lack of corporate tax data. The Build Back Better Act’s version of the book minimum tax allows companies to retain some of the benefits of tax credits and of carrying forward their net losses to future years, but the Senator cannot account for these exceptions in her analysis. While this gap in information is understandable, it makes her calculations for what specific companies would pay under a ‘book’ minimum tax subject to significant uncertainty.

Third, how ITEP and Sen. Warren choose to define taxes paid differs considerably from the definition of taxes reported on most companies’ 10-K reports, which they must file with the Securities and Exchange Commission (SEC) and report publicly on an annual basis.

In short, most corporations’ effective tax rates on their 10-K reports include two broad items: 1)  current taxes paid (i.e., taxes actually paid to the IRS and state/foreign governments in the year of the 10-K report), and 2) deferred income tax liabilities or benefits. These deferred taxes are recorded in the current year, but payments of the taxes (or collection of tax benefits) are deferred to a future year. Deferred income taxes count for determining corporations’ effective tax rates in a given year, since these companies expect that they will owe those liabilities or accrue those benefits in a future year. While the deferred amounts are subject to some uncertainty — and to changes in future years — they seem to represent a good-faith estimate of what a company may owe (or receive) in future years from taxable events occurring in the current year.

As pointed out by NTU and others, a tax on book income as proposed in Build Back Better would undermine companies’ ability to fully and immediately recover the costs of their investments in worker and firm productivity, and would also undermine companies’ ability to smooth out their net operating losses in future taxable years. The Tax Policy Center has also found that the book minimum tax proposal “would deter investment in [certain economic] sectors” even more than a four-percentage point increase in the corporate tax rate.

Analyzing Book Statements of the 10 Companies Singled Out By Sen. Warren

Tables and charts from our analysis are below, but a few takeaways worth pointing out:

Here are charts for the 10 companies featured in Sen. Warren’s analysis.

And here are the differences in various ETR calculations visualized. Two important takeaways from this chart: 1) there are important reasons book and taxable income differ, and 2) since financial statements are not tax returns, we lack important information about a company’s tax liabilities from their financial statements and should proceed with caution in relying on book ETRs to make policy. 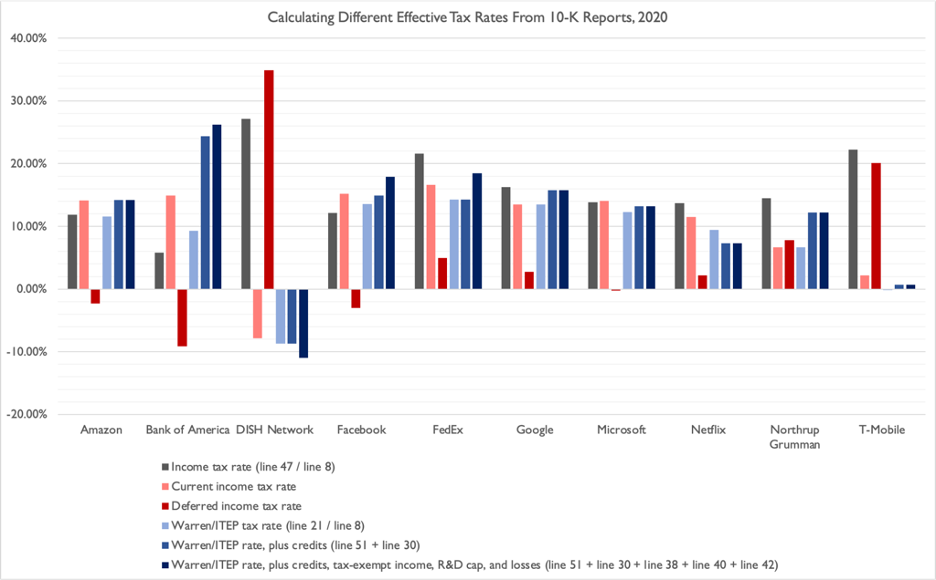 And to illustrate how different companies can report lower financial statement ETRs than the statutory corporate income tax rate of 21 percent, below are two charts exemplifying how Amazon and Bank of America go from the 21 percent statutory rate to a lower reported ETR on their financial statements. The charts also include the proportion of taxable income (i.e., profits) that went toward executive compensation, purely for illustrative purposes. Sen. Warren’s analysis makes executive compensation out to be a major correlation with book-tax differences, but they are often an infinitesimal portion of total profits (even more so for total income). 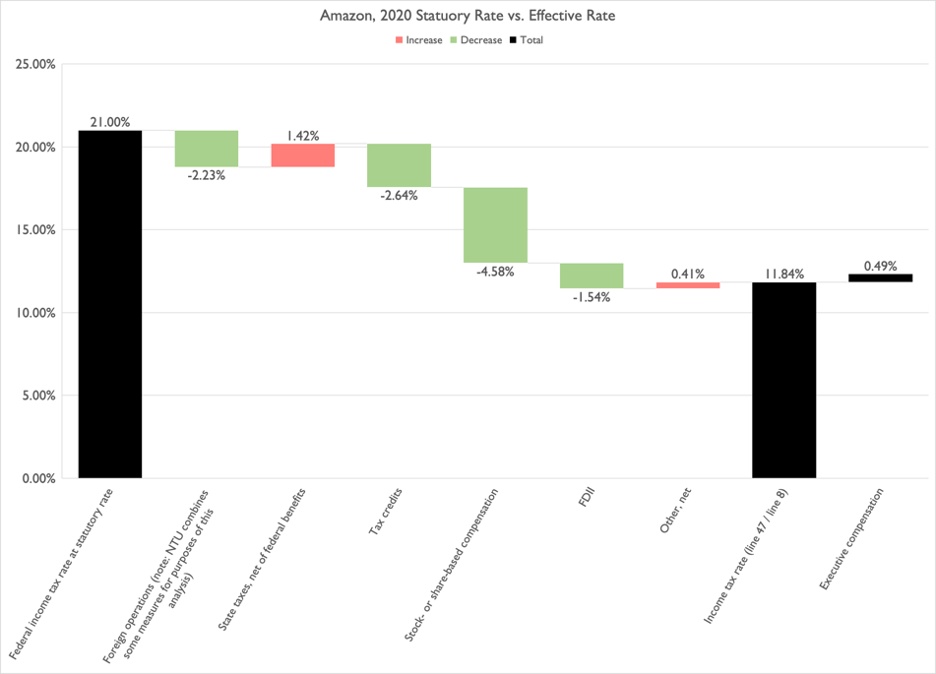 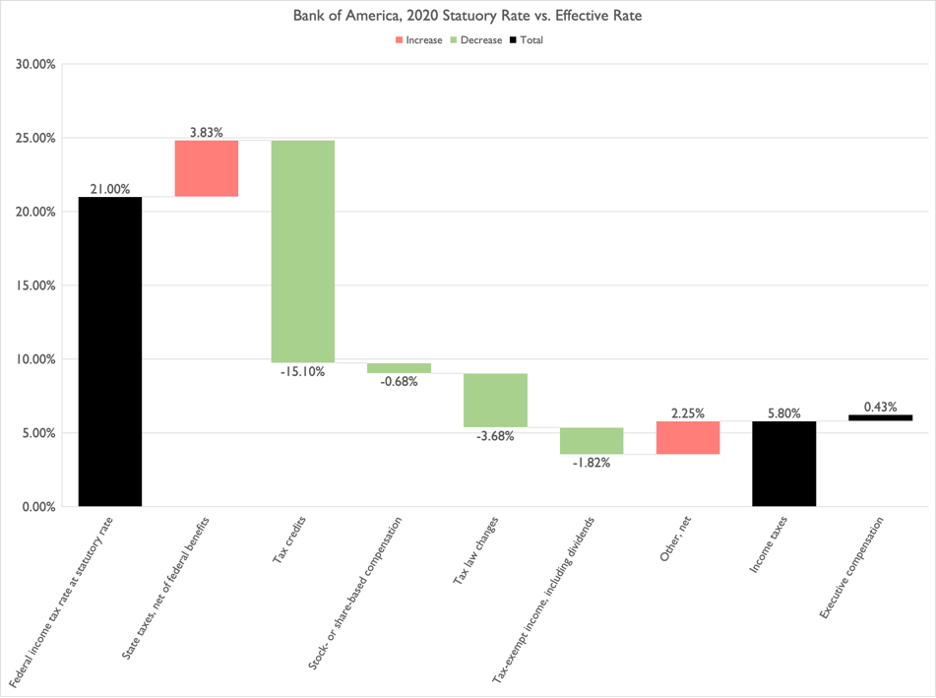 Again, many of the provisions outlined above enjoy bipartisan support in Congress. Many of these provisions, such as tax credits and loss carryforwards, are also still accounted for in the Democrats’ book minimum proposal. This means that Sen. Warren’s analysis of how much these companies could pay under a 15-percent book minimum tax is flawed at best.

Sen. Warren’s book minimum tax analysis is flawed, and lawmakers should disregard the analysis and its assumptions when evaluating the potential impacts of Democrats’ proposed book minimum tax in Build Back Better.

For numerous reasons outlined above — and as noted in previous NTU and NTU Foundation analyses — book minimum tax proposals are significantly flawed, and this new proposal is no exception.

[1] One company, DISH Network, did not provide sufficient information on their 10-K for purposes of NTU’s analysis.

[2] For purposes of this analysis, we count a “substantial” impact as one that changes a company’s ETR by two percentage points or more.

Andrew Lautz is the Director of Federal Policy for National Taxpayers Union.