The infrastructure and entitlement bills pending on Capitol Hill are bad for many reasons. Most of the proposed spending is for activities that the states could pay for themselves if they choose to, including spending on highways, transit, child care, and pre‐​school. It is more efficient and democratic for the states to fund their own programs than for Washington to intervene, as discussed here.

The chart shows that overall state and local tax revenues in the nation are booming. The data from the Bureau of Economic Analysis (Table 3.3) includes income, sales, property, excise, and other taxes. It is reported quarterly but the values are annualized.

Estimated revenues in the third quarter of 2021 were $2.18 trillion, up 11 percent from the pre‐​pandemic level of $1.96 trillion in the first quarter of 2020. Put another way, annual state and local tax revenues are currently about $220 billion higher than before the pandemic.

That is a lot of money that could be used for the activities that the Democrats are proposing the federal government spend on. I favor less spending, taxes, and debt at every level of government. But it makes zero sense for a cash‐​strapped federal government to impose, say, a one‐​size‐​fits‐​all pre‐​school program on the nation when cash‐​flush states could create such programs with their own funds if they wanted to. 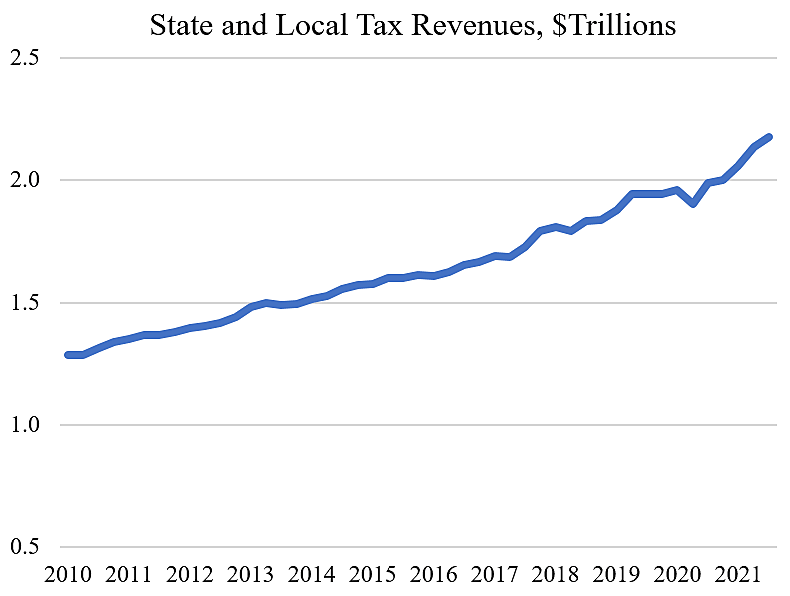 Data note. The BEA has not yet reported corporate tax revenues for the third quarter of 2021, so I conservatively estimated that they were the same level as the second quarter

Chris Edwards is the director of tax policy studies at the Cato Institute and editor of Down​siz​ing​Gov​ern​ment​.org.