Tax Rates on the Rich 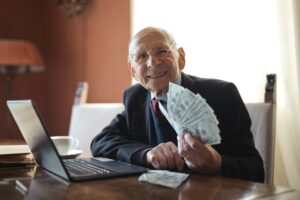 By Chris Edwards. Cato Institute
All standard data sources show that the federal tax system is highly “progressive” or graduated, meaning that top earners pay much higher tax rates than people in the middle or at the bottom. Progressive tax systems are damaging to economic growth, which is one reason why conservative economists favor less progressive tax codes than liberals. But economists on all sides agree that the current tax system is highly progressive.

At least they used to. Not content with data from the Congressional Budget Office, Joint Committee on Taxation, Tax Policy Center, and the Internal Revenue Service showing that high earners pay the highest tax rates, far‐​left economists are inventing dubious figures to try and show the opposite. They do not like what the accepted data shows, so they are trying to move the goalposts to fit their anti‐​wealth narratives. Two Biden appointees in the White House have concocted data purporting to show that the rich pay an average income tax rate of just 8 percent.

Let’s look first at data published by career experts at the Treasury. The chart below shows estimated average effective tax rates by income decile under current law for 2022. It includes federal individual income, corporate, payroll, excise, and estate taxes. Within each decile (or 10 percent group), the figures are total taxes paid divided by income. The chart also shows the Treasury’s data for the top 0.1 percent of families.

The blue bars show that average rates for total federal taxes range from near zero for the bottom 30 percent of families to 31.8 percent for the top 0.1 percent. The top group’s tax rate is about twice as high as the rate on middle‐​income groups. 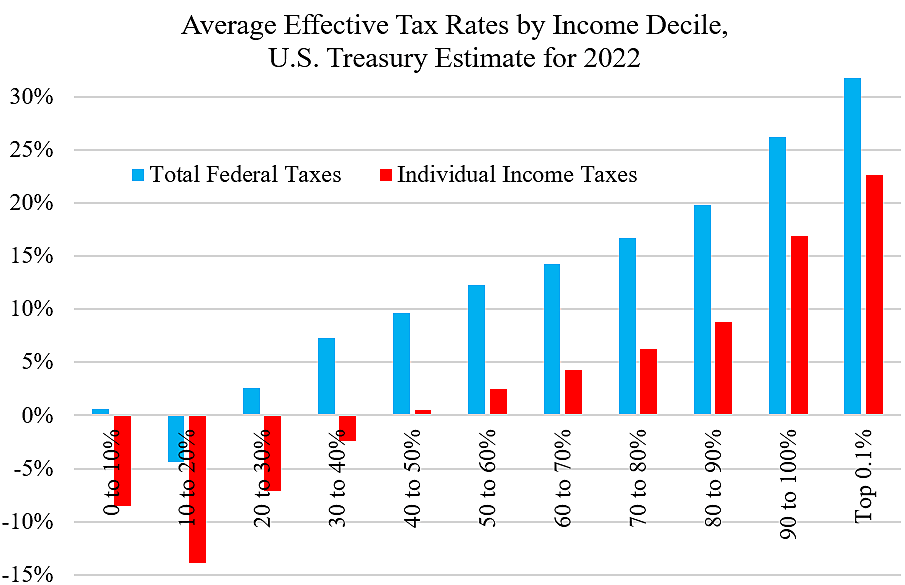 The Treasury data in the chart is roughly consistent with data from CBO, JCT, TPC, and the IRS as I show here. But it is entirely inconsistent with frequent claims by President Biden that high earners are not paying their “fair share” and rhetoric from Bernie Sanders that CEOs pay lower tax rates than their secretaries.

The left has a solution to this glaring inconsistency: invent new data that tries to buttress the Biden‐​Bernie claims about taxes on the rich.

The main reason the 8 percent figure is so low is that Leiserson and Yagan added unrealized capital gains to the denominator of their calculated tax rate. The approach is based on the leftist Haig‐​Simons idea that the tax system should include changes in all asset values in income each year. If Jeff Bezos’ Amazon shares go up $10 billion in value, that is “income” and should be taxed right away even if Bezos has not realized the gains or used them for consumption.

The left likes to focus on companies with high profits and rising values, but large wealth disappears all the time as companies fail and investors lose money. If we had a Haig‐​Simons tax, the government would be hitting shareholders with taxes on unrealized gains in companies that haven’t figured out yet how to earn profits. The graveyard of failed technology companies is vast. They generated unrealized gains at one time, but then they vanished.

Leiserson, Yagan, and other analysts on the left write as if everyone agrees that income for tax purposes should be Haig‐​Simons income, but many economists do not agree. They argue that such a tax base would favor consumption over savings, unfairly favor the spendthrift over the frugal, and undermine economic growth, as I examine here. Haig‐​Simons taxation would also be more complex than consumption‐​based taxation, as I examine here.

Analysts on the left go astray by conflating gains with flows of ordinary income. Their approach conflicts with income as defined in the National Income and Product Accounts, which includes returns to labor and capital but does not include changes in asset prices. Asset prices change when expected future returns change, and a well‐​designed tax system would tax those returns in the future when they are actually generated or consumed. Taxing them again now in the form of gain is harmful double taxation.

Consider human capital. If someone graduates from college with a degree that is rising in demand, her human capital increases and she can expect to earn a higher salary in coming years. But suppose that at graduation, the government imposed a capital gains tax on the rise in her expected future earnings. Such a tax would be crazy as it would discourage people from improving themselves and adding skills. But that is what a Haig‐​Simons tax does to other types of capital—it punishes increases in value and discourages investment.

In sum, the denominator of the claimed 8 percent tax rate is not an appropriate measure of income for a fair and efficient tax system. Because of the impracticality, unfairness, and anti‐​growth aspects of a Haig‐​Simons tax base, the federal income tax has always been a compromise between Haig‐​Simons and consumption‐​based taxation, as have the income taxes of other countries. No high‐​income country taxes unrealized gains in their income tax, and just about every country has favorable treatment of realized capital gains as well.

Chris Edwards is the director of tax policy studies at the Cato Institute and editor of Down​siz​ing​Gov​ern​ment​.org