It’s no secret that Congress sometimes does things – including creating laws – that make little sense and that are contrary to the public interest. One of the most egregious of those laws has just taken effect. The subject – labeling of foods that have been “genetically modified,” or “bioengineered” — is somewhat obscure, but the measure, in the form of a Department of Agriculture regulation that was mandated by the law — affects every American consumer.

The debate over labeling these foods has raged for decades, in spite of the longstanding, unequivocal consensus in the scientific community that mandatory labeling fails every test — scientific, economic, legal, and common-sense. However, in order to preempt state-by-state initiatives that threatened to create a patchwork of labeling requirements that could prove vexing and expensive for food producers, in July 2016 Congress enacted, and President Obama signed, the National Bioengineered Food Disclosure Standard, or NBFDS.

Disparate regulations in different jurisdictions would have been a problem, to be sure, but Congress could, and should, simply have preempted the ability of states to create their own labeling requirements. Instead, it went a bridge too far, by creating a federal mandate to label what it called “bioengineered” food and delegating responsibility for fleshing out the regulation to USDA. It was published on December 21, 2018, and took effect on January 1, 2022. 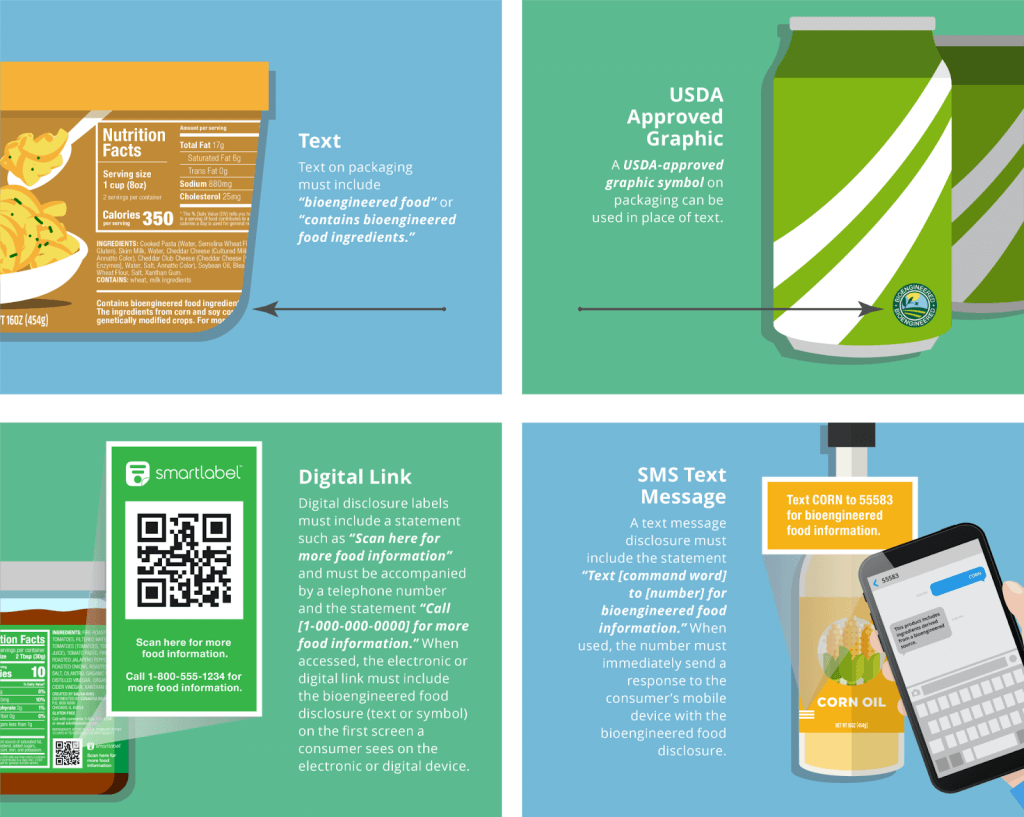 The USDA rule is a masterpiece of incoherence. For example, it does not require the labeling of highly refined ingredients from bioengineered crops “if the food does not contain detectable genetically modified material,” but it allows manufacturers to make voluntary disclosures on such products. That leaves open the possibility that two identical bottles of corn oil on the supermarket shelf, derived from the same harvested field and identical in processing and quality, could be labeled differently – one as “derived from bioengineering” and the other without that designation – but both would comply with the regulation. The rule does not permit “may contain” disclosures.

“Detectable” is also problematic. Technologies evolve and become ever more sensitive, so a single, detectable molecule of “genetically modified material” would make a food “bioengineered.” This is an invitation to frivolous litigation over what is “detectable.”

Under the NBFDS statute, labels are mandatory only if the food is also covered by food labels administered by the FDA or USDA’s Food Safety Inspection Service. Thus, the rule requires meticulous statutory interfaces that may make food lawyers cross-eyed or wealthy – or both. For example, consider this gem:

Seafood, except Siluriformes (catfishes), and meats such as venison and rabbit are subject to the FDCA [Food, Drug and Cosmetic Act] (but not the Federal Meat Inspection Act). Thus, a multi- ingredient food product that contains one of these as the first ingredient would be subject to the NBFDS. A multi-ingredient product that contained one of these as the second most predominant ingredient or lower, could also require disclosure, unless the product is otherwise exempt (for example, due to the predominance of another ingredient such as chicken or beef…

This sort of abstruse verbiage runs for 239 pages.

And then comes the stunner: “The NBFDS is not expected to have any benefits to human health or the environment.” Nor, in our opinion, will there be any value to consumers from the required labeling gobbledygook.

In other words, the benefit-cost ratio of this federal regulation is zero, because there is no benefit. And the estimates of costs in the rule do not take into consideration the many thousands of federal-bureaucrat-hours spent on crafting the rule and for its implementation “in perpetuity.”

When we asked a former OMB director about those costs and USDA’s admission that no benefits would accrue from the rule, he answered: “Amazing, and depressing. Does seem OIRA was asleep at the switch.” OIRA is OMB’s Office of Information and Regulatory Affairs, which had to sign off on the regulation.

Simply repealing the law in its entirety is not a viable option, because it would take us back to the era of a patchwork of inconsistent state-by-state requirements and endless litigation. For example, two decades ago, Vermont passed a mandatory-labeling statute for a bioengineered food—milk from cows treated with genetically engineered bovine growth hormone. Dairy manufacturers sued to block it based on the argument, among others, that the statute violated the First Amendment’s guarantee of freedom of (commercial) speech.

The United States Court for the Second Circuit agreed, finding that “absent, however, some indication that the information bears on a reasonable concern for human health or safety or some other sufficiently substantial governmental concern, the manufacturers cannot be compelled to disclose it.” The court granted an injunction against the Vermont statute.

There’s more that suggests that the premise of the NBFDS is constitutionally dubious. A 2015 Supreme Court case, Reed v. Town of Gilbert, changed the legal landscape dramatically, further calling into question the constitutionality of special labeling to identify foods produced by a particular process, if unrelated to the healthfulness or safety of the protected product. Information required on labels is considered “commercial speech” and must therefore conform to the speech requirements of the First Amendment.

The essence of Reed is the expansion of the range of regulations subject to “strict scrutiny”—the most rigorous standard of review for constitutionality—to include special labeling laws. As lawyer and New York Times Supreme Court correspondent Adam Liptak observed, Reed “marks an important shift toward treating countless laws that regulate speech with exceptional skepticism.” He quotes First Amendment expert Floyd Abrams: “When a court applies strict scrutiny in determining whether a law is consistent with the First Amendment, only the rarest statute survives the examination.” Therefore, a law that regulates a product label containing specific information about a food-production process unrelated to a health or environmental outcome would be highly unlikely to survive such scrutiny, and is probably unconstitutional.

That suggests that saddled with the NBFDS statute as written, USDA had an option. The Executive Branch is not required to implement a law its officials believe is unconstitutional, and the Second Circuit and U.S. Supreme Court decisions cited above suggest that USDA could have declined to issue the regulation and sought support in the federal courts.

To genuinely serve their constituents, members of Congress should revisit the issue and pass a new law that withdraws the requirements of the NBFDS and simply preempts individual states’ ability to create their own food-labeling requirements.

Henry I. Miller, a physician and molecular biologist, is a Senior Fellow at the Pacific Research Institute. He was the founding director of the FDA’s Office of Biotechnology. Drew L. Kershen is the Earl Sneed Centennial Professor of Law (Emeritus), University of Oklahoma College of Law, in Norman, Okla. Find Henry on Twitter @henryimiller