The Midwest Rail Plan: A Disaster Waiting to Happen

The recently passed infrastructure bill includes $36 billion for “federal‐​state partnerships for intercity passenger rail grants.” As page 1008 of the bill states, $24 billion is earmarked for the Boston‐​Washington Northeast Corridor while the rest of the country will divide up the remaining $12 billion. Based on how the Obama administration divided up high‐​speed rail funds in 2009 and 2010, the Midwest will get about $3 billion of this.

As revealed in a Midwest Regional Rail Plan published last month, Illinois and other midwestern states are ready to spend $3 billion and a little more. Make that a lot more: the plan calls for spending $116 billion to $162 billion building about 1,500 miles of new high‐​speed rail and upgrading another 1,000 miles of rail to 125‐​mile‐​per‐​hour standards. 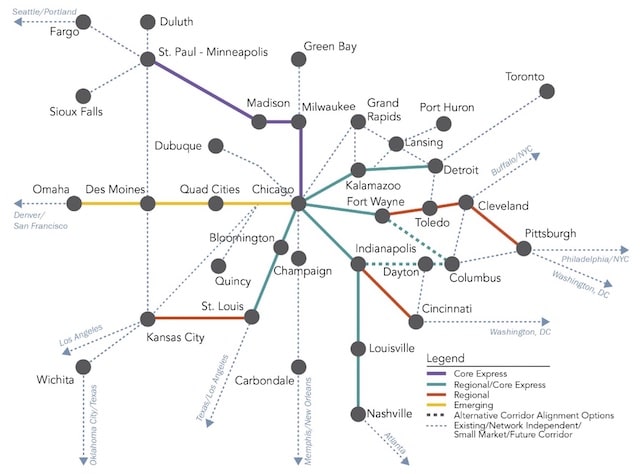 Midwestern state transportation agencies have a lot of nerve writing this plan considering that they’ve already clearly demonstrated their incompetence in building such projects. Since 2009, using a combination of Obama high‐​speed rail funds, other federal funds, and state funds, Illinois, Michigan, and other midwestern states spent more than $3.5 billion to increase speeds and frequencies of passenger trains on routes between Chicago and St. Louis, Chicago and Detroit, Chicago and Omaha, and others.

Now, 12 years later, one of those routes–Chicago-Quincy–knocked 2 minutes off its schedule, increasing average speeds by 0.4 miles per hour. Otherwise, despite spending nearly $2 billion in the Chicago‐​St. Louis corridor and the better part of a billion in the Chicago‐​Detroit corridor, none of the Midwest routes saw any increases in either frequencies or speeds.

Federal funds also included $370 million to buy 88 passenger cars and 21 locomotives. So far, only four cars and one locomotive have been delivered. Basically, the states wasted $3.5 billion.

Despite this failure, the Midwest rail plan calls for building roughly three times as many miles of high‐​speed rail lines as was planned for California. That state, of course, has seen costs balloon: originally projected to cost $20 billion in 2000, the Los Angeles‐​to‐​San Francisco line is now expected to cost more than $100 billion. Construction continues on the least expensive and least populated portion of the route, but no one knows where the money will come from to do the rest.

Even if midwestern states could complete construction of a rail system, it wouldn’t be competitive with the transportation that already exists in the region. One problem with the rail plan is that it is a hub‐​and‐​spoke system centered on Chicago. That’s fine for people going to or from Chicago, but people going from, say, Kansas City to Nashville, Cincinnati to St. Louis, or Minneapolis to Omaha would have to go hundreds of miles out of their way if they went by rail.

Even the more direct routes won’t be competitive. Airlines are currently selling tickets between most city pairs on the Midwest rail plan for $59 to $64 for trips taking about 60 to 90 miles. Just to cover operating costs, Amtrak or whoever runs the rail system would have to charge a lot more for trips taking a lot longer. Shorter trips, such as Chicago‐​Milwaukee or Chicago‐​Indianapolis, would compete against buses whose fares are a lot lower.

Passenger train advocates claim that trains emit fewer greenhouse gases per passenger mile than commercial airliners. The reality is that Diesel‐​powered trains that would operate over most of the Midwest network produce as much or more greenhouse gases per passenger mile. The 1,500 miles of new routes might be powered by electricity, but most electricity in the Midwest comes from fossil fuels.

More important, building those 1,500 miles would generate billions of tons of greenhouse gases. A study of California’s high‐​speed rail plan projected that it would take 71 years of savings to repay the greenhouse gas construction cost, rail lines must be reconstructed about every 30 years, generating more greenhouse gases.

The Midwest Regional Rail Plan is a disaster waiting to happen. Taxpayers can only hope that none of it is funded. For more information, see my four‐​page policy brief reviewing the Midwest rail plan in detail.