Why “Eat The Rich” Leads To Pauperizing the Poor 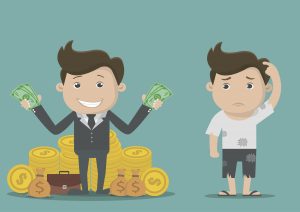 In “The Rich In Public Opinion“, Dr. Rainer Zitelmann lays bare that raw bigotry that threatens to poison the well for everyone who aspires to a better life. We might call this the all-out assault on the very premise of capitalism and its impressive success in moving humanity toward universal opulence.

The incessant demonization of “the rich,” whose only sin is success, should not be seen as anything less than a threat to the general (including your and my) welfare.

Zitelmann’s book presents the stark reality of what this “reverse snobbery” (hatred of the rich) is, and what harm it does, without becoming boringly didactic. The language of the book is accessible and the evidence supporting his argument is clear and compelling. Study after study, often those done by the very people who despise the rich, exposes the deception and lies of those who disdain the tenth commandment, “thou shalt not covet.”

The enemies of economic liberty have presented a clever and yet demonstrably false claim that the rich got rich at the expense of the poor and workers. Their claim is that the rich are unethical, immoral thieves and that wealth is a zero-sum game. Their premise is that those who have wealth can only have it by pauperizing the rest of us.  Balderdash!

Zitelmann does not hold back any punches. This anti-rich bigotry (reverse snobbery) is the only bigotry celebrated by the left’s woke cancel culture. Yet it is as toxic as racism, sexism, and all the other forms of bigotry. It derives from the hellish pits of covetousness and envy, the pillars of those economic systems that destroy legitimate opportunity and its attendant prosperity: cronyism and socialism.

Zitelmann doesn’t just complain. He offers proof that this bigotry is real and dangerous and that its premise is a lie. He decisively refutes the narrative that wealth and success are somehow rooted in evil. He makes an airtight case against that false consciousness.

Pay close attention to Chapter 8 where Zitelmann explains the way we perceive the roots of success. He explains actual studies that were conducted among rich and not-so-rich alike regarding the source of wealth. Is it negative traits, luck, external circumstances or positive individual traits that lead to wealth?

Not surprisingly, the answers often depend on the audience’s level of wealth achievement.

If we have accurate views of the real cause of wealth we increase our own likelihood of achieving wealth. Does this not make more sense than all the mental gymnastics the enemies of capitalism use to defame the rich and make all of us workers their political and social minions?

This view of the power of your own agency is fundamentally true and makes this book all the more urgent now. Zitelmann’s “compensation theory”, which he explains in the book, is a useful warning the aspiring Capitalist should heed. This is a theory wherein the individual who is compensating for their lack of perceived success must denigrate those who are more successful to feel morally superior. It is a small comfort, a guilty pleasure even, and almost an addiction.

Rather than merely posit this the author presents a great deal of evidence from empirical research. In short, he makes his case from the facts, not dogma.

As myself the president of The Capitalist League, and co-author of The Capitalist Manifesto, I believe success is mostly a product of effort and skill. Those who demonize the successful seek to wrap mental chains around us to enslave us. When the socialist and the cronyist hold us back in these chains they laugh all the way to the bank.

After “eating” the rich they come for the rest of us. (Hello Venezuela!) All we can ever hope for is the scraps that may fall from their table.  This has been the case in all seventeen experiments with socialism conducted in the real world.

If you don’t even believe you can succeed without cheating, luck, or theft you may take some cold comfort in conflating your poverty with virtue. But as that great capitalist Deng Xiaoping, who succeed Mao as chairman of the Communist Party of China, once shrewdly observed, “Poverty is not socialism.”  The virtues of capitalism are both moral and practical. Reject the fallacy that success is evidence of vice.

A false consciousness of moral superiority, the sugar coating of the Satan Sandwich of Socialism, won’t provide financial security to your family. It won’t warm you in the cold of winter.  It will not propel your children to a better lifestyle than your own.

Reading this book will not only educate you as to the tactics and lies of the left, it will arm you with empirical evidence for the virtues of capitalism and it will equip you to rise to success yourself.  Make no mistake, The Rich in Public Opinion is an important book. It makes an important contribution to the discourse.  If you are committed to being an intelligent consumer of politics and policy buy and read it today.

William Collier is a partner at Intellz and the President of The Capitalist League.